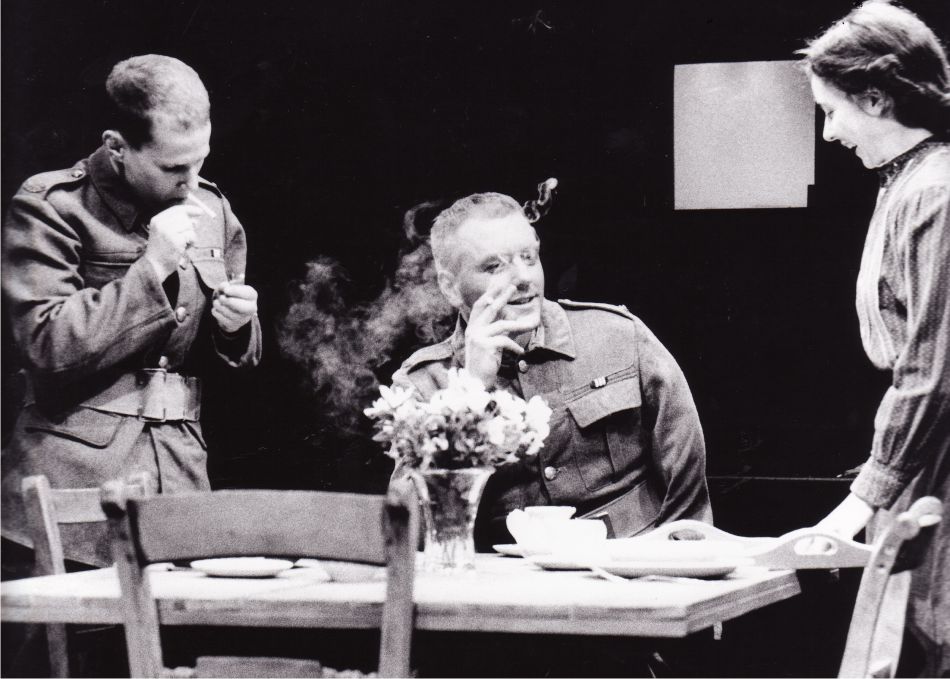 Summer 1918 - a battle scarred soldier returns from the horrors of the trenches to his family, and a hero's welcome.

But who is the stranger he has in tow and what is the terrible secret that the two of them share?

This superb new play belies the myth of war as a gallant adventure and reveals a raw emotion that seeks both reconciliation and revenge.

Back from the trenches - Being present at the premiere of Deadwood was a privilege I would not have missed for worlds. From the first moment the play did what I personally ask of any work of fiction, dramatic or literary: it took me into the closed circle of other people's lives, so that their problems became my problems, their joys my joys, their suffering, my suffering. Its main concern is war and particularly the aftermath of war. Alex Jones deals with this powerfully, exemplifying his theme with the return of two young soldiers from the appalling horrors of trench warfare of World War One. To reveal the plot, including as it does mystery, intrigue and surprise would be unfair, but I can say that the protagonists were varied and truthful. As Bess, the young wife of the wounded Stan, Verity Hewlett opened the play, working in her painfully tidy kitchen with utter conviction and setting then tone of realism for the rest of the evening. Her jilted sister Irene was equally brought to life by Sarah Malin. Stan and Nat, the two returning soldiers, unable to forget the terrible past or to envisage a future worth having were superbly played by James Buller and Callum Dixon, though in fact I hesitate to use the word 'played'. These actors lived their parts. All the characters were well rounded and many-faceted. Beatrice (Helen Dorward), who is a courageous widow, a loving strict mother and a determined survivor, also typified the head-in-the-sand attitude to the war, which was common at the time. Uncle Willy (Desmond McNamara), a fairly useless alcoholic showed himself not incapable of providing comfort and support. Jane Wood as Stan's own mother gave her son uncritical love. The evening was not without its lighter moments. Stephen Hoyle as the young brother Ernie made his ghoulish questions funny and true, and the family party complete with music hall songs was... for a time... a delightful period piece. The flavour of period dialogue excellently caught and the kitchen and its furnishings were those appropriate to a miner's cottage of the time. It was sensitively directed by Stephen Rayne. I have long believed that the poems of Wilfred Owen should be compulsory reading in schools and colleges. Now I would add to that a requirement that young people see a production of Deadwood by Alex Jones. It is all too easy to forget what war is really like. Last night I was most effectively reminded. - Valerie Maskell

Two soldiers return from the trenches of the First World War with very different agendas in this impressive new play, which is premiering at the Watermill. Uppermost in Stan's mind is getting re-acquainted with his wife Bess and exploring the career prospects for a one-armed man, which he is now. But his Cockney pal Nat wants to overturn the whole social order, which in his view caused the war, and he does not mind starting his campaign in Stan's own mining community household. Dramatist Alex Jones explores this scenario with insight and Stephen Rayne's eloquent production does the play justice. There are particularly vivid performances by Callum Dixon as the troublemaker Nat and Sarah Malin as Irene, who sees in him her chances of happiness after a previous blighted affair. James fuller movingly conveys Stan's growing disillusionment, but Verity Hewlett's Bess does not quite come into focus. Sturdy support comes from Jane Wood as Irene's and Bess' formidable Mum and Stephen Hoyle as their cheeky kid brother Ernie. Fotini Dimou's set includes a wonderful old-fashioned range. - Roy Martin

Fine new play tells too much too soon - The grate has been blacked. The whole house is spick and span. The best china is on the table. There's a real stew on the range - it smells delicious. Bess wants everything exactly right for her husband Stan when he returns from the war; she wants to show him "nowt's changed". Down at the railway station a municipal welcome is laid on. The town band is out and the mayor has provided his car for a ceremonial ride home. For Stan (James Buller) is a hero. He has been invalided away from the horrors of the First World War. In this new play Alex Jones builds up the anticipation most skilfully. Young Ernie (Stephen Hoyle) arrives prematurely to inspect the wounds and hear the gory details. Pruriently, you too wonder how disfigured Stan will look. Suddenly he's there, minus an arm and with the other shaking alarmingly as he holds a teacup. And Stan doesn't return alone. He comes accompanied by Nat (Callum Dixon), a Cockney wideboy, who seems less affected by his horrific experiences. But Bess's gloomy forebodings that Stan "will never be the same again" are soon proved true. So far, so very good. You are drawn into the tight family circle by a combination of good dialogue and uniformly first-class acting from the whole cast. Even a stereotype mother-in-law (Jane Wood), hatchet of face and vicious of mouth, is excellently fleshed out in performance. The play begins by making its point simply and without lecturing the audience. But then Alex Jones goes and gives the game away too early. You don't get the chance to guess what might happen, you are told. With a few changes this could become a really moving play. As it is, Deadwood still serves as a grim reminder of the predictable and unpredictable after-effects of war - after effects which the Gulf War showed us are still not fully understood today. - Giles Woodforde

The larks are singing, there's bacon in the larder, the hob has been polished and Stanley's coming back from the war - But Bess is riddled with nerves. She instinctively knows that things can't be the same with a one-armed, shell-shocked ex-soldier. Sensibly she has arranged to wait for him at the house, eschewing the brass band and the mayor's formal war-hero welcome down at the station. Above all they need to be alone. But when Stanley appears he's with Nat, his Cockney mucker from the trenches. Alex Jones has written a compelling, enjoyable First World War family drama, but the mysterious bond between Nat and Stan is submerged until the end. The playwright has been seduced by the techniques of suspense and so withholds the information, which would allow exploration of the idea more fully. The character of Nat (Callum Dixon) is pivotal: is he merely an opportunist, subversive force, or is he a truly radical voice? Stephen Rayne's production paints him as gnat-like as his name: small, malicious, tenacious. Verity Hewlett's performance as Bess is so rich and insightful that she has the audience wholeheartedly on her side. Sarah Malin is equally endearing as Bess's vivacious sister, Irene, and while James Buller's torn and mentally bleeding Stan evokes our sympathy, the cards are stacked on the side of domestic status quo rather than political upheaval. Fotini Dimou's lovingly recreated set only reinforces the sense - who would ever want to leave this cosy little nest once they'd got back to it? - Clare Bayley

The First World War is still raging when Stan returns to his northern pit-town home, invalided out of the services. To his wife's dismay, he brings with him an army mate, the former East End barrow boy Nat. The days that follow underline the gulf between the realities of war for those who fought it, and the assumptions of those who stay at home. Stan increasingly finds himself caught in a no-man's-land between his wife's desire to see him assimilated back into the world that sent him off to fight, and his friend's determination to exact revenge. Alex Jones's new play - one of two he is premiering this month is absorbing, moving and provocative and has a climax of considerable power. There are however some startlingly unsubtle acting. Honourable exceptions include Callum Dixon's Nat, whose Cockney chirpiness is convincingly edged with menace and James Buller's unsettled and unsettling Stan. - Mick Martin

First World War theme that's well explored - As a newspaper story recently reminded us - there are still unexploded bombs lying around from the First World War. There are also dormant themes from that period which the theatre has not explored and Alex Jones tackles them forcefully in Deadwood, which is having its premiere at the Watermill Newbury. It centres on Stan, returning from the front to a hero's welcome at his mining village, but bearing both physical and emotional scars. He brings with him a comrade-in-arms Cockney Nat, who seems at first to be just a Jack-the-lad type, but turns out to be nursing a revolutionary agenda which threatens the fragile equilibrium of Stan's family. This is a fine new play and Stephen Rayne's production certainly does it justice. There are particularly vivid performances by Callum Dixon as gadfly Nat and Sarah Malin as Irene, who sees in him her chance of happiness after a previous blighted affair. James Fuller movingly conveys Stan's disillusionment, and Jane Wood as Irene's and Bess's puritanical mum stands out in the excellent supporting cast.

Letter to the theatre:
Sitting watching your excellent production of Dead Wood the other night, I couldn't help but be struck by the sheer daring of a lone provincial theatre, presenting a new play with no fewer than eight people in the cast! The fact that it was all done with such loving care only added to the miraculous nature of the event. We left the theatre filled with emotion and respect in equal doses.