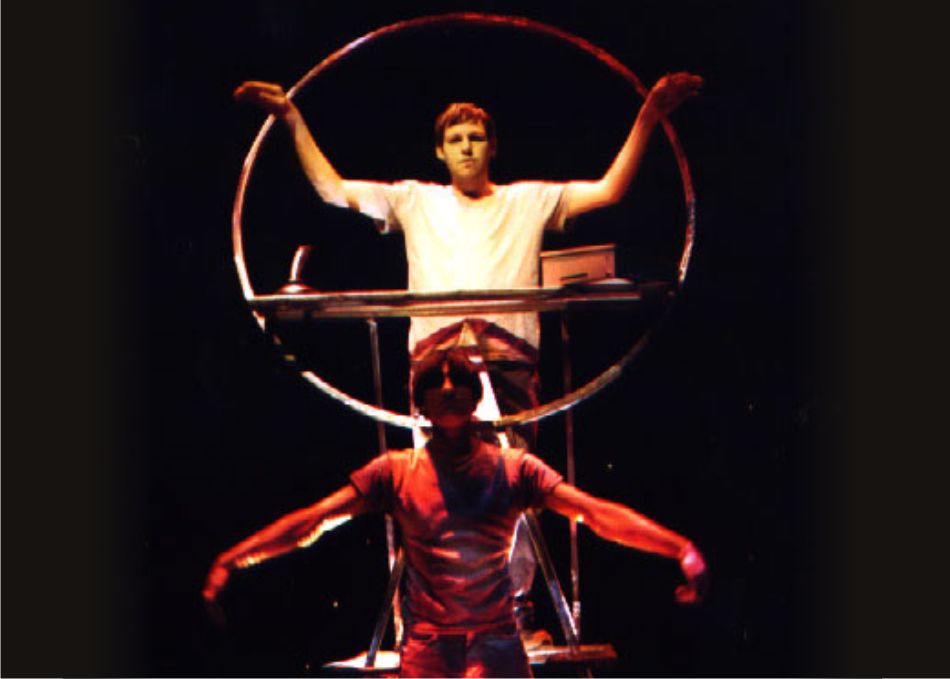 Inspired by improvisatory work by 'The Shysters', a group of learning-disabled actors, directed by Richard Hayhow at Coventry Belgrade Theatre, Fallen Angels has a poetic text that is also inspired by the stories of Cain and Abel and Mary Shelley's Frankenstein, the production centres on an evil God-like being who opts for revenge over redemption by creating and deriding outcasts within society with the help of a confused henchman.

It is dark, mesmerising, but full of redemptive power.

Alive with hope and hilarious dance - Someone somewhere needs to have a quiet word about scheduling with The Shysters. Glowing reports do not flow easily from a reviewer forced to miss out on extra time and penalties in the Italy/Holland euro 200 semi-final to attend the opening night. Hardly their fault perhaps, but none-the-less the company - much like the Italians in the football - were up against it from the start. Which is a situation that's nothing new for the cast of learning disabled actors, and probably the way they like it, judging by the gusto with which they go about the business of breaking down any potential barriers or pre-conceptions. Their latest work is probably their most ambitions, with director Richard Hayhow mixing mime, movement and dialogue by Alex Jones with a lively soundtrack to create an audio and visual treat. Inspired by the stories of Cain and Abel and Mary Shelley's Frankenstein, the production centres on an evil God-like being who opts for revenge over redemption by creating and deriding outcasts within society with the help of a confused henchman. The consequences are powerfully portrayed by performers with first hand experience of the situation, but delivered at complete odds with any perceived moral. For while the message often hints at despair, its delivery - by a hugely committed cast - is alive with hope, the hilarious dance routines especially engaging and effective. With enthusiasm as infectious as this it's no surprise The Shysters came out top - just like those Italians on the football pitch. - Steve Adams

Having lived in Coventry all my life (38 years), I had started to believe that art in Coventry was as rare as water in a desert. However, on Thursday night I found my oasis in the form of the brilliant Fallen Angels performed by The Shysters. This piece of sheer poetry was without doubt one of the most powerful plays (or any other form of media) I have ever witnessed. Performed in a blackout section of the stage and with the audience sat with them, the atmosphere was electric -something that would only have worked in such an intimate setting. Why, oh why then, bearing in mind that the performances have all sold out, were they only on for three nights? The Shysters are billed as being a theatre company of learning disabled actors. Forget it! The Shysters is a company of highly skilled individuals, all of whom give more to their performances than many of the so called "stars" I have seen at the Belgrade. I hope that when this play goes on tour it is given the billing it deserves and the appropriate number of nights for it to play over. Any play that can provide the emotions I went through on Thursday has a right to be seen by more people than have over the last three days. - Steve Shaw. Coundon

I don't think I have ever seen such a powerful, moving performance as the recent Shysters production of Fallen Angles at the Belgrade Theatre. The intensity of this drama moved me to tears. The words, music and movement were so outreaching that I felt as thought I had been sucked into the performance. I felt speechless. On Thursday night, I saw a small group of actors perform so beautifully it could only be described as a masterpiece. To say 'well done' isn't enough - people in Coventry don't know what they missed. - Cheryl Gibbons. Ansty