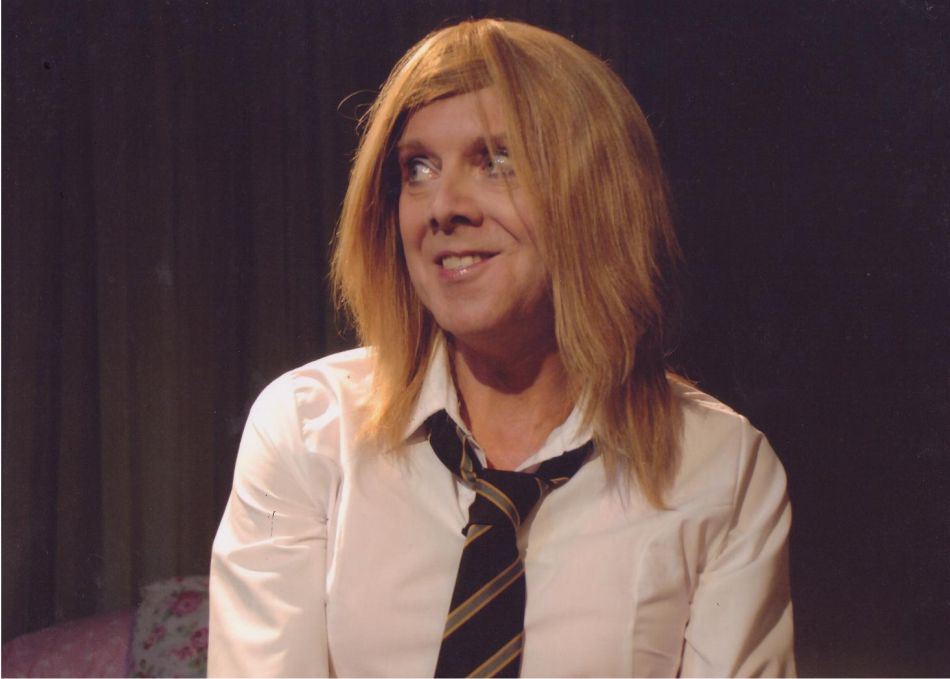 And I know she's done it on purpose, and she invites everybody, doesn't she?

Sophie, Tori, Kathy, Sam, Anna-Lisa - absolutely everybody... except me of course... I want to die!"

A hilarious journey in a world where pain and joy mingle - and sometimes within the very same sentence!

Funny yet poignant, touching on important current issues like bullying, friendship, anorexia and self-esteem - a totally unique production that is not only revelatory and moving, but ultimately seriously entertaining!

I'M A MINGER! was inspired by the experiences of Alex's own teenage daughter when faced with the startling fact that she was becoming disturbingly unhappy with her life and couldn't see a way out of her messy room and messed-up head.

Suddenly self-harm, eating disorders, bullying and suicide-chat rooms were being discussed with his daughter as well as in the national press, and he had to take notice.

This play is a loving and truthful look at some of the most difficult and hilarious parts of both teenage-dom and parent-hood and speaks to audiences of all ages.

OTC copy:
In an outstanding 75 minutes of performance Alex Jones plays the 14-year-old heroine, Katie, her parents, her friends and a host of other characters in this touching and topical tragi-comedy.

FRESH from success in London and the Latitude Festival, Alex Jones' one-man show is the story of 14-year-old Katie's school life, young love, and battles with the bullies and friends.

It's surprisingly easy to buy middle-aged Jones as a 14-year-old girl, speaking fluent text speech and teenage angst, and effortlessly selling the character, based in part on the experiences of his own daughter.

There are a host of other characters for Jones to immerse himself in, from Katie's so-hip-it-hurts parents, to teachers, friends, bullies and a boyfriend, he hops nimbly between roles for the full show, adopting different accents, stances and postures.

Most importantly, you're never in doubt that these are all fully-formed characters, and the stage often seems fuller than it is as one-man conversations take place. The set also sells Jones as a young girl in a mess of unfamiliar emotions, with high walls canted to tower over the small stage, itself strewn with the clutter of a teenage bedroom.

When happy, Katie dances across the stage when upset, she retreats to the centre of her mess – something that the predominantly teenage audience could no doubt relate to.

The brief 70-minute runtime means Katie's problems are wrapped up quickly and neatly, though not entirely convincingly at the end, but this is a minor problem for a funny yet serious show which keeps the audience hooked throughout.

Touching bravely on anorexia, peer pressure and teen suicide, I'm A Minger deserves to be seen by anyone who was ever a teenager. - Dan Bean

Birmingham Post: Tour se force reflection on teenage angst - For a middle-aged man to write a one-person show about a 14-year-old girl requires a stretch of the imagination, but not many would be brave enough to play the part themselves.

Undaunted, that is what Malvern-based writer and actor Alex Jones does here, to remarkable effect.

In blonde wig, short skirt and a range of studied physical mannerisms, he conjures up his character Katie, a typical teenager from a supportive middle-class family with the usual adolescent preoccupations of self-image, status and peer-esteem.

Katie doesn’t communicate well with her teacher mother and pretentious amateur chef father. It seems she genuinely cannot tidy her room because it would involve carrying out a series of actions in a sequence she cannot grasp.

Initially secure in her texting circle of school friends, she is clear about which of her contemporaries are to be looked down on, and why.

But when she finds herself the victim of her friends’ fickleness and the bullying text messages start, her self-esteem collapses. When she casually logs on to a chat room discussing suicide the play takes us into a dark and lonely place.

The gradual ebbing of Katie’s self-confidence is beautifully written. The author’s tour-de-force performance, even including a brief ballet sequence complete with tutu, also spans a wide range of supporting characters effortlessly conjured up by changes of voice.

The play was partly inspired by a newspaper story about the suicide of a 14-year-old girl, and partly by Alex Jones’s observations of his own daughter and the pressures to which teenage girls are vulnerable.

It is touring across Britain after its initial run at the Belgrade and is clearly aimed at teenage or school audiences. But be warned that Katie’s reflections on life come fully armed with a highly graphic vocabulary.