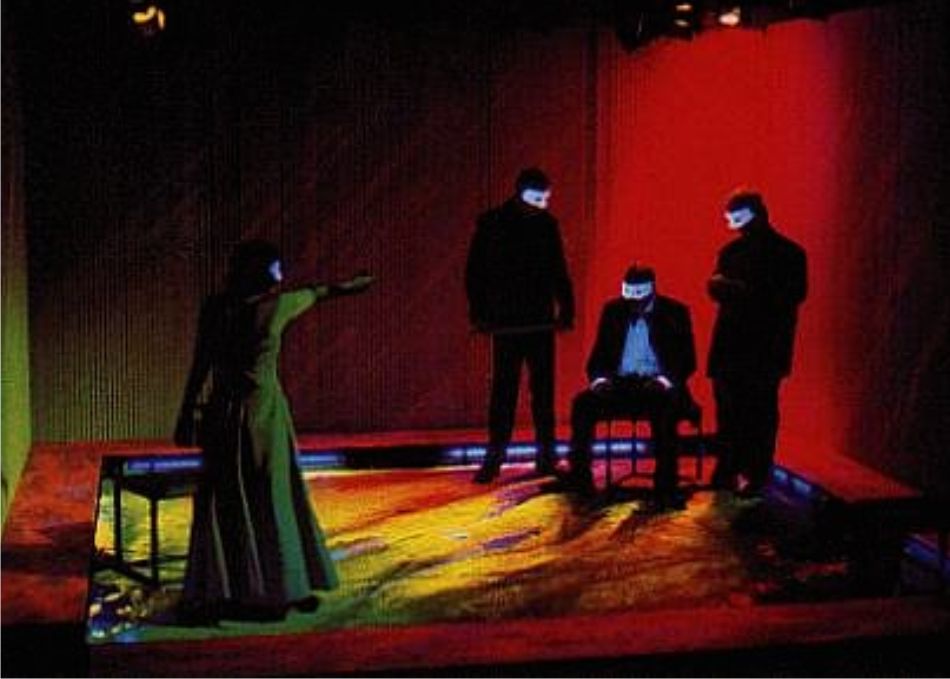 A girl plays innocently on the beach.

Soon she hears thunder and the rain washes away her happiness.

It's time to move on to a more exciting life in the big city, the girl runs from one extreme to another, desperately trying out different roles and different lifestyles.

She meets others doing the same.

She can't find what she's looking for.

Scary Antics is a black comedy with masks, a girl's journey through life made imperfect by herself and others.

Written for The Shysters, a company of actors with learning disabilities, the play takes place through a poetic voice-over with music.

The Shysters 'Scary Antics' is a visually stunning piece of theatre. With is dreamy, sometimes nightmarish ambience; it is akin to an extended sequence from a Peter Greenaway film. The cast of learning disabled actors and actresses use music, mime, masks, texts (a poetic voice-over by Alex Jones) and mime in telling the story of a young woman's search for love in a sometimes turbulent world. Without any dialogue they rely on movement and expression to communicate feeling. As with other expressionistic pieces, it can be difficult to follow at times, but if you let the set pieces wash over you, it succeeds as more than capable avente garde theatre. - Ross Holloway.

A group of ten young actors with learning disability, The Shysters have been together since the beginning of 1997 as part of Coventry's Fountain Theatre Company. This expressive mime and movement piece takes as its themes the life-choices we make, the ways we decide who we are, the constant search for friendship and the deep-rooted need to 'join once more the nonchalant mass of the roaring ocean.' Above all what concerns The Shysters is how we don masks to function in society and seem unable to ever take them off again. The young, bewildered girl struggling to find her way through the myriad, confused levels of human interaction could be any one of us. Visually it is simple, but highly effective. The cast perform in a three-sided box, which at first looks solid, but allows them to slip through the walls or wave their arms menacingly from the other side. Meanwhile, the lighting conveys the set in strong well-defined streaks, blocks and washes of colour. With music ranging from Pachelbel to Bjork, this is an atmospheric, often eerie production which leaves a poignant aftertaste. - Alastair Mabbott.

A baffling voyage of self-discovery - 'Scary Antics' is a baffling show. Although fascinating to watch, for the majority of its 80-minute duration I didn't have the faintest idea what was going on. The Shysters, a company of actors with learning difficulties, present a tale of self-discovery in a highly stylised non-naturalistic show which utilises voice-over, masks and pop music to unusual effects. The play is based on emotions rather than the traditional coherent story structure. With tracks like Bjork's 'It's Oh So quiet' and Lou Reed's 'Perfect Day' blasting out over carefully choreographed movement sequences, the piece takes on a dream-like quality, which is by turns beautiful, mesmerising and clumsy. Although the show is overlong, Alex Jones poetic and occasionally profound narration punctuates the action and aids audience. Nettie Edward's picture book set design is a delight, setting the scene for what is a effectively a masked journey through a world of joy and pain. The cast offers energetic, unconventional performances, which add to the somewhat surreal flavour of the evening. - Daniel Brocklehurst.

'The Shysters' are a young company of ten actors, all of whom, the programme tells us, have learning disabilities. Beware of sympathy. Beware of making concessions. They need none. The Shysters have left all that behind them. They make no case for allowances to be made for them. They are not asking for the possibility of being cast in roles normally reserved for "normal" actors, if such extra-terrestrial beings exist. The Shysters start with the assumption that theatre is created out of experiences of human beings and is expressed through the physical actions and emotional inflexions of actors.

In 'Scary Antics', a young woman searches for love in a world made imperfect by herself and others: a world in which people play dangerous games with each other... Although the action is completely fictitious, the real-life experiences of the company are those we all expect to meet in life, or expect not to meet and have to confront, sometimes with humour, sometimes painfully. The Shysters meet these experiences in their own way and with their own resources. They are like us and they are not like us, and in that lies the power and attractions of their drama. I have seen 'Scary Antics' three times. I could happily see it once a week for a long time more. It has moved me with the emotions expressed, it has made me laugh with the clowning, it has moved me to rise to my feet and cheer at the curtain. I feel very luck to see beginning to flower, what I called in an article "The Silent Revolution", small groups of actors with a vision of the theatre they want to create, which has always been the best way the best theatre has come into being.

The Shysters are in the vanguard of the growing number of the companies in the silent revolution. They are an important part of the future of the theatre in the country. As with any new movement in theatre, their theatre is a theatre with a sense of style. In many ways they have taken devices and techniques from the avant-garde theatre of the past, in their case, Expressionism. They use masks, mime, and silent action under a voice-over text. The setting they use and the lighting are carefully integrated into the action of the plot, allowing a swift flow from scene to scene and creating fluid moods of menace, anticipation and excitement. The Shysters need no sympathy or understanding, but they do need support. Those who support them ought to be able to say in the future that they could see early where the new paths of theatre were leading to. But that depends on the support they get now. - Clive Barker.