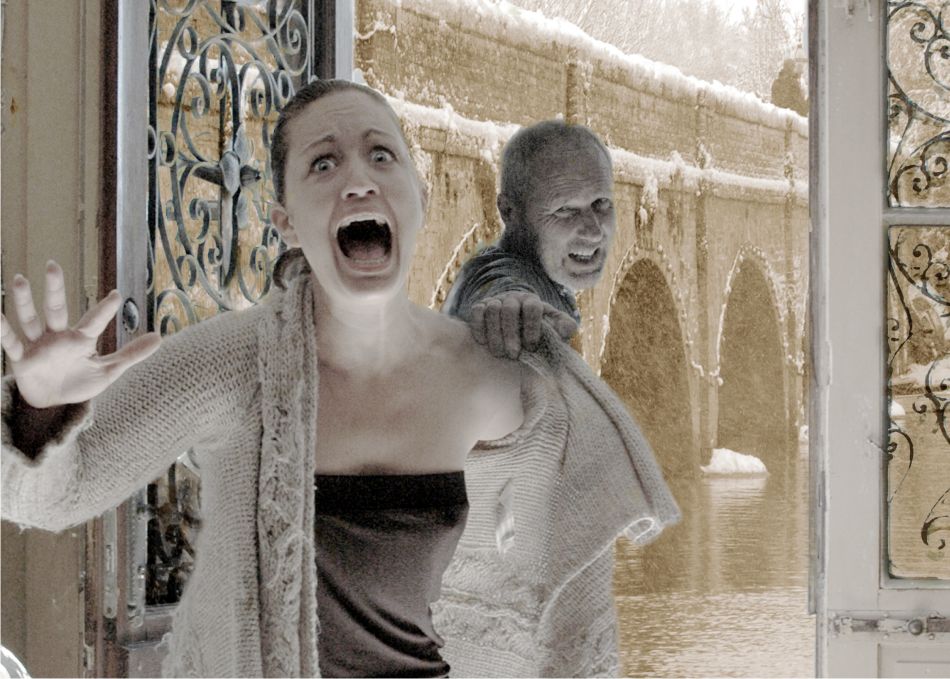 Teenage couple Tom and Lucy are on the run.

Offered shelter by a mysterious stranger, they hide away in a shadowy ancient house.

As the candlelight licks the paneled walls, Lucy becomes convinced she'd been in this room before - hundreds of years before...

A spine tingling supernatural thriller that hurtles Tom and Lucy between their twentieth century present and their civil war past lives, The Bridge will keep you on the edge of your seat and send shivers up your spine.

For the second time this year, the swan theatre has hosted a new play by Midlands writer Alex Jones, this time as part of Pentabus Theatre Company's tour. Jones' theme, inspired by the Civil war and the Battle of Worcester, is an interesting one. Namely the repeated patterns of human experience stretching across the centuries. He taps into the eeriness that old buildings can give, of an almost felt presence of those who have been there before, and makes this his starting point for an intriguing psychological drama. A young peasant couple, on the run after the battle (he fought for the wrong side) are sheltered in the attic of his rambling, half-timbered house. Three hundred years later, in the same room, a stranger shelters another couple on the run from a squat in Worcester, where threatened with eviction, the young man has attacked the landlord. The intermeshing of their stories, mainly achieved by clever use of language, gives a poignant impression of the helpless lives of the poor throughout the ages and the desperate struggle to survive. The play's power is strengthened by two touching performances as the young lovers from Victoria Hayes (making her professional debut) and Alex Harcourt-Smith, who both project great vulnerability, and the Mephistophelian stranger, played with a sinister intensity by Kim Durham. Directed by Theresa Heskins, with a tight atmospheric set from Arnim Friess, this should be a play to touch local audiences on Pentabus' circuit. - Ann Fitzgerald

In your face, up close and personal, the three players from Penatbus Theatre gave Ledbury a treat in their electric performance of The Bridge at the Burbage Hall. A well-crafted juxtaposition of today's disenfranchised youth with Cromwellian fighting and troubles, the story told with Cromwellian fighting and troubles, the story told of a young couple deeply in love, spanning the centuries pursued by a malevolent Rigsby-like landlord with intentions, of course, on the girl. It had us on the edge of our seats and engrossed in the interplay and interpolations of the trouble both then and now, police became militia and time stood still. The individual characters were extraordinarily crafted with an outstanding first performance by Victoria Hayes as Lucy, supported by Alex Harcourt-Smith as Tom, her boyfriend, together with a solid well-timed Kim Durham. The ending was pure Edgar Poe with the villain trapped in a web of his own creation. Excellent lighting and effects, together with the choice of venue, made it real. Pentabus delivered a quality of acting and professionalism that you would have to travel a long way to better. - Spencer Lane

Thriller play is first rate - History is doing more than repeating itself in this fantastically innovative and well-crafted play by Worcester playwright Alex Jones. Supernatural chamber piece, The Bridge, follows Lucy (Naomi Gudge) and Tom (Laurence Aldridge), two squatters on the run from the police. A mysterious stranger John Atkin (Adrian Bouchet) offers them shelter in the attic of an old Worcester building. But the pair have more than the police to worry about when Lucy begins to remember things that happened to her in the room hundreds of years ago. It becomes clear this is more than just deja vu and there are darker forces at work. Staged by Mouthpiece, in the pub's small room, the audience is in the thick of the action, sometimes uncomfortably so. Performances by the cast are first rate; coping with the fraught emotions that have to be convincingly conveyed in inexplicable circumstances. The ending avoids a dissatisfying ambiguity, but does, on occasion tread a very thin line between the sublime and the ridiculous. Writer Alex Jones is the man of the man of the moment with his play River's Up also running at the Worcester's Swan Theatre. This refreshing and gripping play boosts his reputation as a writer to be reckoned with. The Bridge plays at The Bull's Head until Sunday. - David Lewins