The Masque of the Red Death 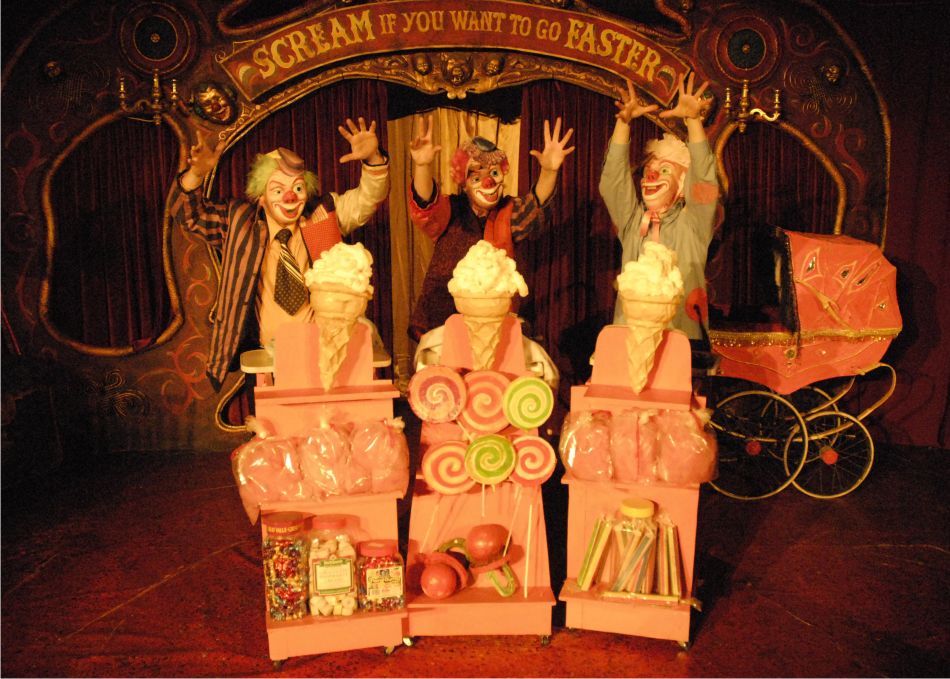 Toured twice in 2004 and 2006 to towns in Herefordshire, Worcestershire, Gwent and Shropshire. Each tour was for 5 weeks there were 65 performances seen by approx. 3,000 people.

Instead of an imaginary town devastated by plague, this town has been hit by drugs, and the masked ball becomes a rave.

The set was like a fairground ride, spinning the audience from scene to scene.

The show for audiences 14 upwards blew the misconception that 'puppetry is for kids' out of the water, and gave young people an amazing theatrical experience that tackled challenging material.

The text was a menacing poetic monologue from the MC, Prospero, who steered the audience from scene to scene.

Each performance was followed by a workshop led by a professional drugs awareness counsellor, as the play explored themes such as drug and substance use and misuse.

Issue-driven drama is a notoriously difficult genre - earnest tendentiousness can be the kiss of death, however admirable the intention. Not so on this occasion. Fetch Theatre's brilliantly provocative adaptation of Edgar Allan Poe's gothic story of plague-ravaged city into a vehicle for engaging the contemporary nightmare of drug-threatened rural England is a tour de force of total theatre. Over the past two years designer/director Andrew Purvin has forged a potent performance idiom involving masks, puppetry, grand guignol, music and dance mime to draw Fetch's audience into an uncompromising theatrical experience. Poe's dance of death is given the framework of a fairground freak show where the comic grotesque rules. The audience becomes fixated participants as the seats spin to the accompaniment of strobe light and pulsating music. There is something of a black cabaret in the sinister performance of Sean Calsen's barker/pimp/dealer and impresario. He has a Mephistophelean swagger and a Faustian nemesis. Not only are the puppets superbly sculpted, they are animated and mobilised with poignant expressiveness by the three actors. Actors and puppets moving in both senses as one. One of the show's conceptual strengths is its challenging of conventional notions of dangerous drugs. In one visually stunning sequence, for instance, three grotesque baby puppets are force-fed a familiar battery of junk foods. If there is a weakness, it is an overabundance of ideas at the expense of narrative focus but this is a vibrant piece of physical theatre.