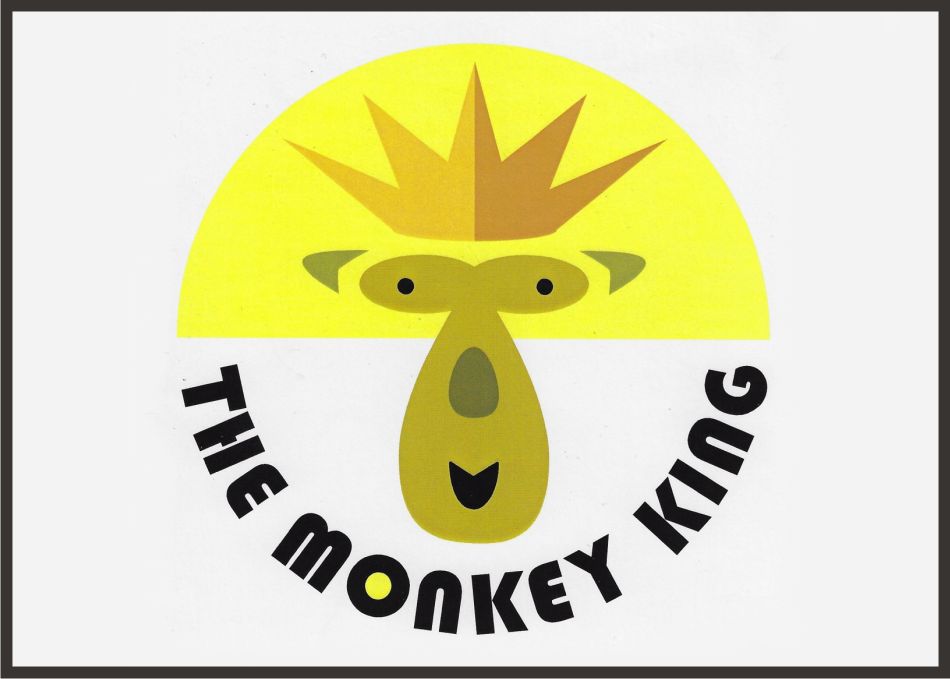 The Jataka Tales owe their origin to Buddhism. Tradition and belief have it that the Buddha came to earth in several human and animal forms. The stories of these previous births are known as the Jataka
Tales. The tales tell many interesting stories of the Buddha - The Monkey King is one such story and is inspired by the classic Buddhist tale.

It explores the spiritual and physical relationship between mankind, the environment and the creatures we share the world with.

There is a great river in India called the River Ganges. Its massive banks are green with trees and the dark, secret jungle lies on each side,stretching away to the horizon.

Halfway down the river there grows a beautiftul mango tree; its branches dipping down to kiss the river, its long, long roots sip the water that gives it life.

With the use of a poetic text and from the point of view of a tribe of monkeys who are governed by the wise and benevolent king, Kapi; we see how Kapi is almost supplanted by Korung, a jealous rival who wants to be human, and finally by the intrusion of the human world into their idyllic jungle life.

But the human King Brahmadutta by Kapi's brave example learns that nobility is also about caring for the world and those we share it with.

The Monkey King project has been more than just an arts project: it has been about children learning from and about each other. They have recognised the talents in each other, and how to communicate these in the context of music and drama. The contribution of the Shysters Theatre Company has been excellent, providing positive role models to lead all of the children. The richness provided by the various artists contributing to the development of this project has made it an unforgettable experience, with learning outcomes that will stay with those children forever. Richard Hayhow's direction has been inspirational to watch and, as ever, the commitment and leadership offered by David Gaukroger, Sunfield's Director of Music, has been outstanding. We are grateful to all of the contributing artists for their dedicated work with all of the children. - Barry Carpenter OBE Chief Executive & Principal, Sunfield School

The tale of The Monkey King is more than 2000 years old. We chose it because it has allowed us lots of room for our imaginations to have fun with it. We have looked at the story from all possible angles - what you see, what you hear, what you smell and even what you taste are all important ingredients of the performance - in the hope of giving you a truly rich and satisfying experience.

We've been together now on and off for two years - children and adults from the two schools, a bunch of artists, a few musicians and the Shysters. The journey has been at times frustrating and chalenging, but ultimately it has been an immensely rewarding one it's difficuit to imagine life without the Monkey King now! - Richard Hayhow, Director

THE MUSIC
In a collaborative project such as The Monkey King, music has such an important part to play. In particular it supports the action and develops the emotions of the characters.

It would have been easy to produce a score for the musicians to play Instead, we have relied upon improvisations, based in many cases around ideas springing from the children. No two performances will be the same, although there is always a kernel of consistency and form that enables the musicians to shape the music to the pace of a particular performance.

One example of child input is in the song "Fear in the Forest". This arose out of group discussions about the nature of fear, what kinds of things made one frightened and how the fear might be represented. Out of these discussions there slowly emerged couplets of verse which were subsequently refined and arranged to produce the song.

improvisation can only work if musicians are both talented and have empathy one with the other. I have been fortunate to work with such a group of fine professionals. - David Gaukroger Director of Music, Sunfield

THE SHYSTERS
The Shysters are widely acknowledged as one of the UK's most innovative theatre companies and are some of the most accomplished actors with learning disabilities. Through a devising process Shysters draw on their experiences and perceptions and, via their own brand of thrilling drama, dance, mime and anarchic comedy, transform them into the stuff of unmissable theatre. Adventurous artistic collaboration is also at the core of their work  - The Monkey King project has been a wonderfully inspiring opportunity to work with so many other people and push out those creative boundaries even further!

SUNFIELD
Sunfield is a residential special school, home to 72 children with severe and complex learning needs. Many are autistic, others have brain damage or brain disorders and all are capable of challenging behaviour. Sunfield has a proud history in the arts; prominent artists have worked both with Sunfield children alone and with groups combining Sunfield children and those from neighbouring first and high schools. This production of The Monkey King has been almost 2 years in the making, the outcomes are truly amazing both in dramatic and social relationship terms.

A NOTE FROM HAGLEY MIDDLE SCHOOL
Hagley Middle School closes in July; what a wonderful final memory for our Year 8 pupils. We are proud of the children who have represented H.M.S. Thanks for the unique opportunity - we have enjoyed our involvement.
Year 8 boys said -"We've all enjoyed working with pupils from Sunfield and The Shysters- thanks!"
Year 8 girls said - "The Monkey King is very different to what we expected, we've never done anything like it before. We are really looking forward to the final performances".